In the field of GaN-based LEDs such as blue and white LEDs, Japanese domestic manufacturers are still in a dominant position. The reason is that the scale of mass production ranks first in the world. Although the overall mass production of GaN-based LED chips of Taiwanese manufacturers exceeded the overall size of Japanese domestic manufacturers at the end of 2004, "there are still very few products that can compete directly with Japan" (Toyota Synthetic).

The reason why Japanese companies rarely deal directly with Taiwanese manufacturers is because the quality of LEDs produced in Taiwan is still very low. "Taiwan manufacturers' blue LEDs are roughly divided into three types. They are A-grade products whose quality is not enough for low-priced products in our company's products, and B-class products with lower quality than A-class products but with certain requirements. And Class C products that can only emit blue light. Class A products can compete with Japanese products, but only account for 10% to 15% of the total" (Nichia Chemical Industry).

The Nichia Chemical Industry intends to use the former as its core strategy to launch a positive attack on Taiwanese companies with patents, mass production and price weapons. â€œWhen a patent is infringed, the lawsuit is filed, and when the opponent launches an attack with a monthly capacity of 1 billion, the capacity is also increased to 1 billion to competeâ€ (the company).

For the Nichia chemical industry, it is also a threat for Taiwanese manufacturers to have an advantage in the Chinese mainland market strategy. The mainland market is expected to grow rapidly due to the demand for the 2008 Beijing Olympic Games and the 2010 Shanghai World Expo. The major LED manufacturers in Japan, the United States and Europe have not obtained patents for GaN-based LED technology in China. Even if GaN-type LEDs infringing patent rights appear on the mainland market, if there is no patent on the mainland, no lawsuit can be filed.

In the case of manufacturing such LEDs in Taiwan, Japanese, American and European manufacturers have filed patent infringement lawsuits in Taiwan because they obtained patents in Taiwan. But like PCs and mobile phones, if Taiwanese manufacturers move their production bases of GaN-based LEDs to the mainland, the road to legal means will be blocked. "Targeting the special needs of the Beijing Olympic Games is expected to come out of the negotiations results around 2006. Prior to this, it was intended to suppress Taiwanese manufacturers and establish a sales network in the mainland" (Nichia Chemical Industry). 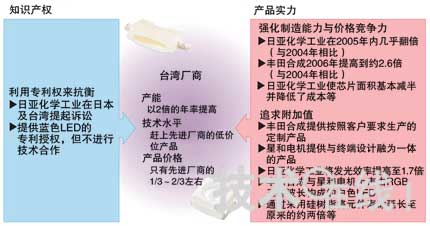